“There were literally thousands of qualified Trump-supporters eager to join his administration, yet those responsible for personnel decisions decided to retain Obama employees or hire NeverTrumps, who, collectively, either resisted or actively undermined Trump and his America First agenda.  The consequences of that neglect are now playing out in the Senate impeachment trial.”

[While true, that description does not include the many higher-up heads which have rolled out of the Oval Office.] 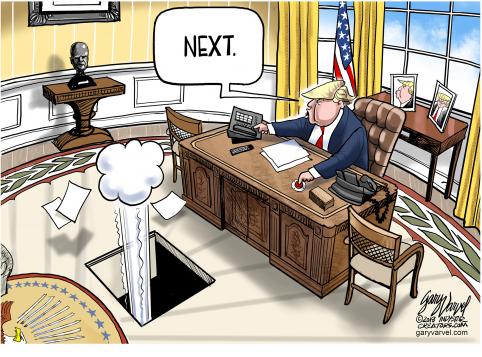 [As we have stated on dozens of ASND pages, what makes good satire good is its ability to expose painful truths using humor.]

Obama Political Appointees to Continue as Career Employees Under Trump

Why is O-Trump-bama’s IRS rehiring employees who falsified documents and had unauthorized access to information?

What Is an Architect of Obamacare Doing Advising Trump on Health Care?

“Border Patrol Agents Feel Betrayed by the Trump Administration [for] picking an Obama holdover whom they despise to be their boss.”

Does President Trump Know What a Radical Environmentalist He Picked in                  Peter Navarro?

“Trump’s Chief of Staff General Kelly has instituted tight restrictions on information and contacts reaching the president.  Additionally, Kelly has been said to be working closely with General McMaster on issues related to the flow of information within the administration.”

[A few months later, however…]

‘Tired of being told no,’ Trump freezes out chief of staff Kelly

“Trump on occasion has called White House aides to the private residence in the evening, where he makes assignments and asks them not to tell Mr. Kelly about                 the plans.”

Kelly’s most vehement critics even suggest the bungled Porter episode could herald Kelly’s demise within the Trump administration.

“Kelly and Mattis have been Tillerson’s strongest allies in [Trump’s] cabinet.”

[The assertions made in that article re: Tillerson’s conflicts w/ Trump have been denied by both Ts.  Why, then, is that article relevant on this page — especially just prior to the next citation?  See  this page  and  this page .]

An Ideological Coup against Trump

“So we now have a strong repudiation of the narrative component of the purge which… successfully removed every Trump Administration official aligned with Trump’s campaign promises regarding national security.”

Bannon: ‘The Trump Presidency That We Fought For, and Won, Is Over’

Trump slow in making political appointments compared to his predecessors

“Trump is well behind his most recent predecessors… in making nominations to build    his administration.”

200 days into his presidency, Trump still hasn’t nominated administrators
at the same pace as previous presidents

Donald Trump Jr. is an idiot

Trump Jr.’s ‘dodgy’ meeting
Why the emails about his meeting with a Russian lawyer during the campaign matter

“This is a matter of a president being hopelessly compromised because of his own longstanding and weird advocacy of Russian interests, in combination with this attempt at campaign collusion with the Putin gang – and in combination with Trump firing an FBI director specifically (in Trump’s own words) because Trump was upset with the director’s conduct in the Russia probe.”

A Major White House Shakeup Is The Best Thing Trump Can Do [May, 2017]

[Written just prior to the revelations about H.R. McMaster, which will likely see him not just fired as NSA Director but also spend the rest of his life in jail for treason.]

“Marc Rosenblum is an Obama administration alum and amnesty advocate.  He also happens to be the deputy assistant secretary at the Office of Immigration Statistics (OIS) at the Department of Homeland Security…  During the Obama years, Rosenblum was a strong advocate of [illegal alien] amnesty…  Rosenblum has [also] argued that illegal immigrants commit fewer crimes than native-born Americans, but a recent study shows that is not true…  Rosenblum has [also] publicly criticized Trump’s immigration policies… Should an amnesty advocate be deputy assistant secretary at DHS Office of Immigration Statistics?  Especially one with a history of using false or misleading data to justify unconstitutional executive amnesty?  President Trump needs to purge Obama-era partisans out of positions of influence.  If there’s any hope of fixing our immigration system and curbing illegal immigration, pro-amnesty radicals must be purged from the Department of Homeland Security.”

Trump’s pick as labor secretary: Legalizing immigrants is ‘the right thing to do’

Trump’s Labor Secretary Is About to Violate the President’s Agenda.
Why He Should Delay This Obama-Era Rule.

Alexander Acosta, President Donald Trump’s replacement choice to run the Department of Labor, advocated for easier immigration and amnesty for people who previously had come to the United States illegally.

“… [Trump] has assembled the most antitrade team of presidential policy advisers since the 1920s.”

Though that team may not actually win the antitrade game:

Is Jared Kushner really the man for the job?

“If [Trump’s] NIH were serious about finding the truth, it would be funding a very different kind of study.  As it is, the agency is demonstrating the tactics of the so-called ‘war on science’ that the Left continually decries.”

Trump-Backed Nominee To Head EEOC Is Hostile to Religious Freedom

[However, the fake Flynn/Russia story was just the beginning of Flynn’s problems.]

Flynn stopped U.S. military plan Turkey opposed – after being paid as its agent

[Flynn definitely made mistakes while serving his short stint as NSA, but those errors were nothing compared to the errors of the Left — including the judge overseeing his case — have been committing since Flynn resigned.]

“October 20, [2017] EPA officials announced that the renewable fuel [e.g. corn-sourced ethanol and other biodiesels] volumes for 2018 will be at or above what had been originally proposed, reversing the implication of statements made earlier in the year by [Trump-appointed] administrator Pruitt.”

Anyone who claims to want to “drain the swamp” would be wise to start with repealing,       or at least amending, the Renewable Fuel Standard.  Why hasn’t Trump even begun?

“A Goldman Sachs veteran serves as Trump’s current Treasury Secretary and as his chief White House strategist.  The firm leans left and cozies up to Big Government…”

“A [Trump] nominee for the federal bench, Matthew Spencer Petersen, made a fool of himself during his confirmation hearing when he proved himself unable to answer basic questions about the law and testified he had never tried any case in any court.”

Ben Carson Really Put His Foot in His Mouth Regarding Slavery