The New York Times [finally] gets the truth out about pot

‘We are at ground zero of new medical epidemic’ 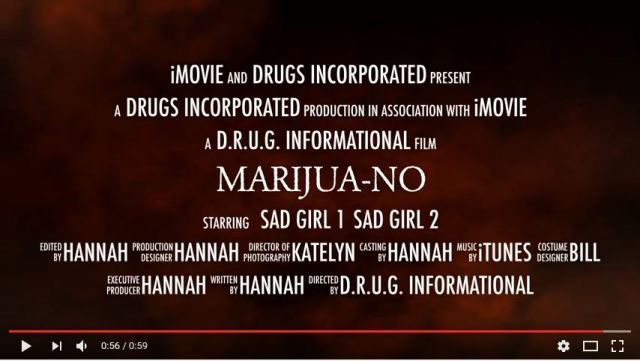 Marijuana: A Gateway to…

Cannabis use appears to increase rather than decrease the risk of developing nonmedical prescription opioid use and opioid use disorder.

“Some research suggests that marijuana use is likely to precede use of other licit and illicit substances and the development of addiction to other substances.”

“A few years ago, it was rare to see a young person enter Caron with marijuana-induced psychosis…  Now we see it on a regular basis…  We’re certainly seeing a lot more emergency department visits due to marijuana…  We’re seeing more people with paranoid delusions.  We’re seeing a lot more people with signs of acute psychosis…  We see a significant misperception about the safety and efficacy of marijuana among our teen and young-adult patient population.”

Some of the Many Measured, Medical Effects of Marijuana

There is substantial evidence of a statistical association between cannabis use and increased risk of:
1) Motor vehicle crashes
2) Development of schizophrenia or other psychoses
3) Development of depressive disorders
4) Incidence of suicidal ideation, suicide attempts, and suicide completion
5) Lower birth weight of users’ offspring
6) Worse respiratory symptoms and more frequent chronic bronchitis episodes

There is moderate evidence of a statistical association between cannabis use and increased risk of:
1) Overdose injuries — including respiratory distress — among pediatric populations in U.S. states where cannabis is legal
2) Impairment in the cognitive domains of learning, memory, and attention.
3) Development of substance dependence and/or substance abuse disorder for substances including alcohol, tobacco, and other illicit drugs

There is moderate evidence of a statistical association between a persistence of problem cannabis use and a history of psychiatric treatment.

There is no or insufficient evidence to support or refute the conclusion that cannabis or cannabinoids are an effective treatment for:
1) Cancers, cancer-associated anorexia cachexia syndrome and anorexia nervosa
2) Symptoms of irritable bowel syndrome
3) Epilepsy
4) Spasticity in patients with paralysis due to spinal cord injury
5) Symptoms associated with amyotrophic lateral sclerosis
6) Chorea and certain neuropsychiatric symptoms associated with Huntington’s disease (oral cannabinoids)
7) Motor system symptoms associated with Parkinson’s disease or the levodopa-induced dyskinesia (cannabinoids)
8) Dystonia (nabilone and dronabinol)
9) Achieving abstinence in the use of addictive substances (cannabinoids)
10) Mental health outcomes in individuals with schizophrenia or schizophreniform psychosis (cannabidiol)

90% of U.S. pot smokers use marijuana primarily for recreational purposes.  Only 10% of U.S. pot smokers use it purely for medicinal purposes.
Compared to non-users, daily pot smokers are 3.2 to 4.9 times more likely than non-users to have psychotic episodes, including schizophrenia, depending on the potency of the plants being smoked.
In Colorado, since recreational use of marijuana was legalized there has been a 10% increase in motor vehicle accidents and a 280% increase in calls to poison control centers due to children accidentally ingesting a cannabis-containing product.
Marijuana users have poorer cognitive and executive function compared to non-users.  This is most pronounced in people who started in their teens.
Of those who start smoking pot before age 18, 1 in 6 become addicted to it.  Of those who start smoking pot after age 18, 1 in 10 become addicted.

The Fallacies of the “marijuana is harmless” Argument

“Five years of Big Marijuana [in Colorado] ushered in a doubling in the number of drivers involved in fatal crashes who tested positive for marijuana, based on research by the pro-legalization Denver Post.  Five years of commercial pot have been five years of more marijuana in schools than teachers and administrators ever feared.”

Emergency Rooms Seeing Rise In Syndrome Related To Marijuana Use

In the U.K. alone, cannabis puts 27,000 people each year in hospital

“These findings strengthen the argument that marijuana is not a benign substance.        Not only can it be associated with many destructive and aggressive behaviors, it can also be associated with severe symptoms of anxiety and depression.”

Effects On The Brain…

“There was a decreased amount of grey matter”

Regular Cannabis Use Is Linked to IQ Decline

Smoking cannabis ages the brain by an average of 2.8 YEARS
Brain ageing is defined as reduced blood flow through the vital organ
Reduced brain blood flow has been linked to stroke and dementia
Bipolar disorder accelerates brain ageing by 1.6 years, while ADHD does by 1.4

For psychiatric patients, a link between marijuana and violent behavior

Smoking marijuana DOES make people more violent:
Project confirms for the first time that using the drug is the cause of crimes

Chronic cannabis use may cause brain inflammation

Perception of Marijuana as a ‘Safe Drug’ Is Scientifically Inaccurate, Finds Review of         Teen Brain Studies

When Adolescents Give Up Pot, Their Cognition Quickly Improves

“… cannabis use in late adolescence and early adulthood is associated with a range of adverse outcomes in later life… [including] poorer educational outcomes, lower income, greater welfare dependence and unemployment and lower relationship and life satisfaction.”

Yet another peer-reviewed study: Marijuana ‘strongly linked’ to psychosis

Scientists discover a genetic link between cannabis use and Schizophrenia

Marijuana smoke contains many of the same cancer-causing substances as tobacco smoke.

Marijuana Use May Increase Risk of Testicular Cancer

Study Confirms an Association Between Marijuana Use and Testicular Cancer

Marijuana Use May Cause Severe Cyclic Nausea, Vomiting, a Little-Known, but Costly Effect

Number of Deaths Caused by Marijuana Much More than 0

[Those statistics are several years old now.  ASND has not updated them.]

“A growing body of evidence, here and in other countries, is revealing that marijuana has caused previously overlooked deaths through heart attack and stroke.”

Marijuana DOES trigger heart attacks, experts say in landmark study that slams most of the drug’s medical benefits as ‘unproven’

Cannabis can kill even without the influence of other drugs

Legalized marijuana linked to a sharp rise in car crashes
About 14 percent of drivers under the influence of pot had a child in their vehicle.

“Five years of Big Marijuana [in Colorado] ushered in a doubling in the number of drivers involved in fatal crashes who tested positive for marijuana, based on research by the pro-legalization Denver Post. ”

Heavy teen marijuana use may cut life short by 60

[Yes, that article was cited in another section above but it belongs here as well.]

Tell Your Children The Truth About Marijuana, Mental Illness, and Violence

About 1 in 6 people who start smoking marijuana in their teens will become addicted.

5 Facts about marijuana addiction
1) Marijuana addiction is a DSM-listed reality
2) Nearly 3 of 10 marijuana users manifest addiction symptoms
3) Approximately 3.4 million people in the U.S. are addicted to marijuana
4) Marijuana use is likely to increase the risk of developing schizophrenia and other psychoses, suicide, cognitive impairment, lower educational attainment and unemployment.
5) Currently, there is no treatment that has been proven effective for marijuana addition

“The risk of [marijuana] addiction goes from about 1 in 11 overall to about 1 in 6 for those who start using in their teens, and even higher among daily smokers.”

Marijuana Use Prior to Pregnancy Doubles Risk of Premature Birth

Marijuana Use Implicated in Pregnancy Problems

Marijuana can alter DNA in sperm

US companies are being warned over unfounded claims about medical marijuana

What You Should Know About Medical Marijuana

Most in US think cannabis has health benefits, despite serious dearth of data

Marijuana Doesn’t Hurt Anyone But The User?:

My Dad Will Never Stop Smoking Pot
Marijuana makes him carefree and happy. But years of using the drug had a ruinous effect on my family.

“... legalizing marijuana would serve little purpose other than to worsen the state’s drug problems—addiction, violence, disorder, and death.” 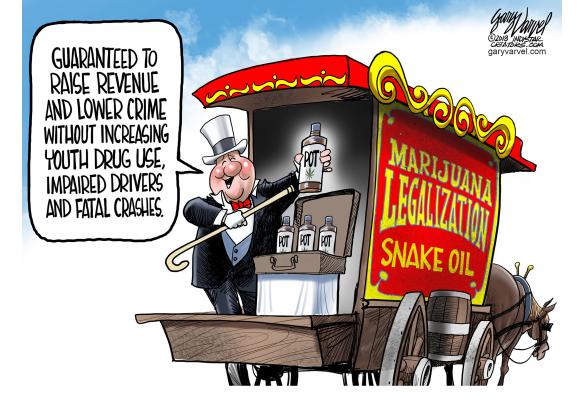 Legalization of marijuana at the state level has resulted in at least 10 recorded instances of fires or explosions at facilities that extract hash oil.

Colorado’s experiment with marijuana legalization has been an epic disaster, according to one doctor — certified in cannabis science and medicine — seeing its effects on the front lines.
https://freebeacon.com/issues/colorado-doctor-sounds-alarm-on-marijuana-legalization/

“… poor medical-marijuana patients can apply to the state registry for free and not have to pay sales tax on their cannabis purchases.”

Denver Drug Agent: Our Problems ‘Have Exploded’ With Pot Legalization

Bad ‘Spice’ Continues To Be Problem In The Denver Metro Area

“… the tiny, odorless devices are being widely used, sometimes even on [middle and high school] campus[es].”

California’s cannabis black market has eclipsed its legal one

“A billion dollars of tax revenue, the taming of the black market, the convenience of retail cannabis stores throughout the state — these were some of the promises made by proponents of marijuana legalization in California.  One year after the start of recreational sales, they are still just promises.”

[Speaking of California and drug money…]

[While that seems odd, it has happened in other states as well, but it has almost always changed — i.e. increased —  after the second year  of legalization.]

More Legal Marijuana Will Mean More Kids In The ER

“Getting high is an extreme sport for couch potatoes who want to turn the passing of time into a mental obstacle course.”

What Does the Bible Teach About Marijuana?
“[I]ntoxication clearly is forbidden in Scripture (e.g., Eph. 5:18)…  Whereas wine [which the Bible both allows and even prescribes as medicine for certain applications] will intoxicate only with sustained use (and thus with restraint can have a strictly dietary use), marijuana immediately intoxicates the user…  [P]art of the reason the Bible prohibits drunkenness… is so that believers will not find themselves in a state in which they are not able to discern the will of God.  Certainly, marijuana use jeopardizes this in a way that the moderate use of wine does not…  [Additionally,] if the Bible intended for us to use marijuana in moderation, as with wine, then why do we not find the same kinds of detailed guidelines for drugs (including marijuana) that we do for wine and other alcoholic beverages, since we know that many drugs were available and in use in the first century?”

By Analogical Reasoning, Recreational Marijuana Use Is a Sin

Another liberals “argument” for marijuana put to rest: The Bible *Does* Consider          Pot Use a Sin